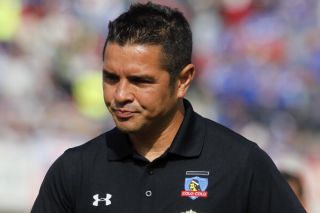 But Universidad Chile beat Nublense 3-0 on matchday 16, keeping them level on points with the table-toppers.

Santiago Wanderers are a point back in third and they face Colo Colo on the final day of the season.

Colo Colo set up their win over Cobreloa in the opening 34 minutes at the Estadio Monumental David Arellano.

Cristian Vilches, Gonzalo Fierro and Juan Delgado struck for Colo Colo, who eased past the bottom side.

Jaime Valdes' penalty made it 4-0, only for Jair Reinoso to score a consolation goal for the visitors.

Gustavo Canales' 18th-minute penalty sent them on their way before Patricio Rubio and Ramon Fernandez sealed the win in the second half.

Wanderers had more of a battle, but they eventually edged Union La Calera 1-0 thanks to Roberto Gutierrez's 75th-minute goal.

Elsewhere, Cobresal had a 3-1 victory at Barnechea and Universidad Concepcion edged Antofagasta 1-0.

Huachipato recorded a 2-1 win at San Marcos and O'Higgins played out a 1-1 draw against Audax Italiano.

Rafael Caroca and Manuel Villalobos had Iquique in control, only for Boris Rieloff to see red just after the half-hour mark.

But Alvaro Ramos' brace put Catolica on level terms in the 90th minute as they looked set to earn a point.

However, Villalobos struck a dramatic late winner for the 10-man hosts.