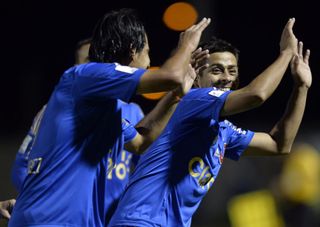 Martin Lasarte's Universidad Chile routed cellar-dwelling Cobreloa 4-0 in their round 14 fixture away from home on Saturday.

Patricio Rubio made it four goals in three games after doubling the visitors' advantage two minutes shy of the hour-mark.

Cesar Cortes came off the bench to make 3-0 just two minutes later, while substitute Benjamin Vidal completed the scoring in the first minute of injury time.

Audax Italiano were on the verge of a point, when Diego Valdes cancelled out Felipe Flores' 31st-minute opener with nine minutes remaining.

But Argentine midfielder Emiliano Vecchio had other ideas as he restored Colo Colo's lead five minutes from time at Estadio Monumental David Arellano.

The Wanderers are a point further back thanks to a 2-0 victory over nine-man Antofagasta.

Francisco Sepulveda and Jorge Elizondo were both sent off for second-bottom Antofagasta within 18 minutes of each other in the second half, and the Wanderers took full advantage with Gaston Cellerino and Matias Mier on target.

In other results, Jean Pineda's 45th-minute penalty lifted fourth-placed Union La Calera to a 1-0 win at home to Universidad Catolica.