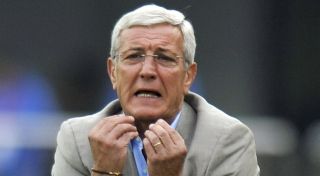 Marcello Lippi's side continued their dominance of Chinese football with another success, which keeps their hopes for a treble alive.

Guangzhou – who have qualified for the AFC Champions League final and are in the last four of the Chinese FA Cup – sealed their hat-trick of league successes with an exciting win at the second-placed Shandong Luneng.

Rong Hao and Gao Lin were the players responsible and Zheng Zhi got the party started when he netted a fourth in the 65th minute.

Roda Antar scored a late consolation for Shandong but it mattered little as Evergrande were crowned champions once again.

Shandong are guaranteed to finish second, despite their defeat, with just three games to play.

Beijing Guoan sit third but dropped points in a 1-1 draw at Liaoning Whowin.

Zhao Junzhe put the hosts in front in the 56th minute, but Ecuador international Joffre Guerron produced an important equaliser for Beijing.

Beijing's closest challengers in the bid for third – which brings with it automatic entrance into the AFC Champions League – Guizhou Renhe, suffered a 2-1 defeat at Shanghai Shenhua.

The league's form team, Tianjin Teda, won for the fifth time in a row as they beat Dalian Aerbin 2-0 thanks to goals from Li Hongyang and Carmelo Valencia.