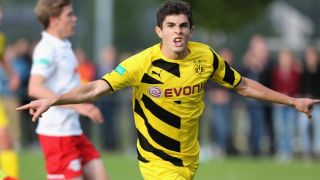 American teenager Christian Pulisic made his Bundesliga debut Saturday, coming on as a 68th-minute sub in Borussia Dortmund's 2-0 win over Ingolstadt.

The 17-year-old had impressed during winter friendlies with the first team and made his first appearance on Dortmund's bench in last week's win over Borussia Monchengladbach.

With the score tied 0-0, Pulisic came on for Adrian Ramos and slotted into a left midfield position. The teenager looked dangerous with a few attacking moves and crosses from the left flank that nearly led to goals.

Shortly after Pulisic's entry, Pierre-Emerick Aubameyang headed home the winning goal before the Gabon international added another tally in the closing stages to seal the win.

Pulisic signed with Dortmund as a 16-year-old in January 2015 and has worked his way through the team's youth ranks in his year with the club. He's been capped at the U-15 and U-17 level by the United States.