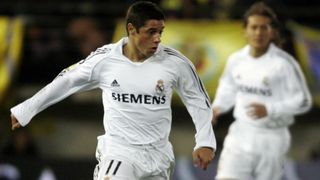 Former Real Madrid defender Cicinho revealed several senior players at the LaLiga giants "manipulated" the dressing room during his time at the club.

Cicinho spent two seasons at Madrid and made 32 appearances across all competitions, helping the side become Spanish champions in 2006-07.

However, the 36-year-old, who most recently played for Turkish club Sivasspor, said there were several players who controlled the dressing room, the manager and the Spanish press.

"When Roberto Carlos left, I was the main [right-back], Sergio Ramos was central and sometimes on the right, and then Michel Salgado was the third-choice full-back," Cicinho told ESPN Brasil.

'Then [Iker] Casillas gave the second captaincy to Salgado so he could play. That's where these little groups started. Julio Baptista told me about it.

"Guti, Salgado, [Ivan] Helguera, Raul, Casillas... those were the leaders of the group. And those who entered the group were those who obeyed them.

"They were the ones who manipulated. They would eat the head of the press and the manager.

"For example, one day Ronaldo had a bad game, and the next day it came out on the front page that Raul was better than him. Raul would have had to be born three times to try to be like Ronaldo."

On Salgado, Cicinho said: "When he came into the dressing room, he greeted everyone, but when it came to greeting me, I would tie my boots."