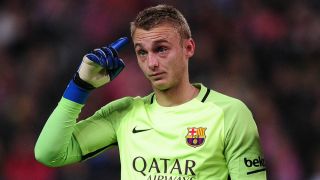 Barcelona goalkeeper Jasper Cillessen will consider leaving Barcelona next January if he has still not broken into the first team.

Cillessen only played once in LaLiga and once in the Champions League this season, with Marc-Andre ter stegen preferred in goal by Luis Enrique.

The Netherlands international, who joined from Ajax last year, has had to make do with seven appearances in the Copa del Rey, a competition where Barca face Alaves in the final on Saturday.

And while Cillessen is in no rush to leave Camp Nou, he will look at his situation again midway through 2017-18 if he has been unable to unseat Ter Stegen as the starter.

"I have not thought about listening to offers, I'm fine here," the 28-year-old told Sport.

"If I play very little, we will see in the winter transfer window, but for the moment I am not thinking about anything.

"I'm not happy if I don't play. When I arrived I knew that I would have to adapt myself to many new things."

Cillessen is optimistic that he does have what it takes to win a battle for selection with Ter Stegen.

He continued: "Next season without a doubt I will fight to be the number one goalkeeper at Barcelona.

"Of course I feel capable. If I wasn't, Barcelona wouldn't have signed me.

"They signed me because they think I have the potential necessary to play here, not to be on the bench."