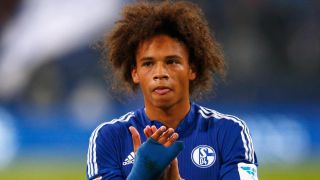 Pep Guardiola has played down the prospect of Manchester City being able to secure prime transfer target Leroy Sane.

The Germany forward has been extensively linked to City over recent weeks, with reports earlier on Wednesday suggesting the Premier League club were close to agreeing a £42million fee with Schalke.

Christian Heidel, general manager at Schalke, has stated the 20-year-old has expressed a desire to leave and will do so this close-season.

But, speaking after a 1-0 friendly defeat at former club Bayern Munich, Guardiola suggested City and the Bundesliga side are some way apart in terms of striking a deal.

"Sane is a player of Schalke. Of course we talk to him – Schalke knows we are interested but at this moment we don't have many possibilities to get him," Guardiola told a post-match news conference.

"There's a difference between City and Schalke and it's quite big but I don't know what's going to happen in the coming weeks and months."

City have already acquired midfielders Ilkay Gundogan and Oleksandr Zinchenko ahead of the new season, along with Spain forward Nolito.