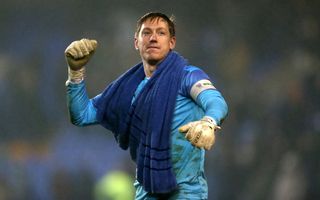 Scott Davies grew up idolising a club very much in the shadow of Manchester United so the Tranmere captain would relish putting one over the Premier League giants in the FA Cup this weekend.

Aged 32, Davies recalls United’s years of supremacy under Sir Alex Ferguson all too painfully but the lifelong Manchester City supporter reflected with some satisfaction about how the tide has turned in recent years.

While Davies insists he will keep his emotions in check for the fourth-round encounter at Prenton Park on Sunday, the goalkeeper hopes Tranmere can increase the pressure on United’s under-fire manager Ole Gunnar Solskjaer.

“Twenty years of my childhood and growing up as a teenager was absolute torture, so the last 10 years or so has been great,” he said.

“They always looked down on Man City over the years but now it’s turned around quickly. If myself and my football club can have an influence on them having another bad day then great.

“It would be unbelievable. I’ve already had plenty of text messages along those lines, from United supporters as well!

Davies was in the away end when City claimed a seminal 6-1 victory over their city rivals at Old Trafford in 2011.

He added: “It was a great day for me and my old man, he’s a huge City supporter and been going there 30 years.

“I go to most home games and a lot of away games when we’re not playing Sunday and midweek games so I’ve been to plenty of derbies at Old Trafford and at City.

“There’s a big hatred for Manchester United in the family but on Sunday it’s purely professional.”

Tranmere advanced to this stage courtesy of an extra-time victory over Watford in their third-round replay on Thursday night but Davies admitted United will prove an even more formidable foe this weekend.

While Tranmere were routed 7-0 by Tottenham last year, Davies pointed out their win over Watford – as well as their back-to-back promotions to League One after play-off final triumphs – proves they can handle the big occasion.

“We’re under no illusions that it will be a huge task,” Davies added. “We saw what happened last year in the game with Tottenham but you learn lessons from occasions like that.

“We don’t just want to compete, we want to win. If you said that we were going to beat Watford in the third round, you’d have probably said ‘no chance’.

“You can touch on the play-off experiences, there’s enough experience in the dressing room, so on that front it’s just another one and one we can play in with no pressure.”

As for the significance of this tie to Davies, whose career started at Morecambe and has taken in Fleetwood and Accrington while he has made in excess of 200 appearances for Tranmere, he knows it will stay with him forever.

“When I’m working doing whatever in 20 years’ time, I’ll look back and be able to say that I played against Manchester United in the FA Cup fourth round, no one can take that away from me.”