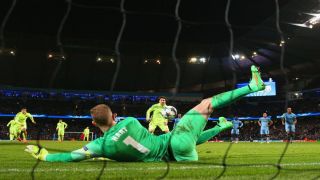 A first-half double from Luis Suarez put Barca in command of Tuesday's first leg at the Etihad Stadium, but Sergio Aguero pulled a goal back after the break to give the Premier League champions hope.

Gael Clichy was then shown a second yellow card for a foul on Dani Alves 16 minutes from time and City never really looked like avoiding defeat from then on.

It could have been worse for Manuel Pellegrini's side, as Messi was upended by Argentina team-mate Pablo Zabaleta in the final minute of stoppage-time to earn a penalty.

The prolific forward was unable to take his phenomenal goal tally for the season to 38, though, as Hart dived to his left to keep out Messi's spot-kick and he headed the rebound wide.

Hart hopes that could be crucial heading into the second leg at Camp Nou on March 18 and the England goalkeeper believes it is still all to play for.

When asked how important his penalty saved could be, Hart told Sky Sports: "I hope it proves to be important, just as important as the open goal that was missed straight after it!

"I can't decorate the save, it was not that good, but these little things can hopefully turn tides."

He added: "First half, up until the first goal, we were in the game, but Barcelona took their goals well. Other than that, we stayed in the game, and I have not been overly busy all night.

"It was a great goal from Sergio and we had other chances. We go home with a chance."