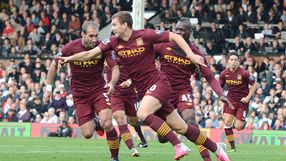 Borussia Dortmund provide the opposition at the Etihad Stadium looking to build on their 1-0 victory over Ajax Amsterdam in their opening Group D match while mega-rich City need to win after losing 3-2 in Madrid two weeks ago despite leading 2-1 with less than three minutes of normal time remaining.

Group D is the only one of the eight in the first stage comprising four reigning champions and City can ill-afford another slip-up if they are to avoid last season's fate when they failed to advance to the last 16.

Coincidentally they were also grouped with German opposition then, losing 2-0 at Bayern Munich last October before beating them by the same score at home on the night they were eliminated in December.

Striker Sergio Aguero told reporters after City beat Fulham 2-1 in the Premier League on Saturday that both competitions were of equal priority for the club.

City do not have to worry about the League Cup as they were knocked out of that competition by Aston Villa last week - their first defeat at home in any competition since January - and another home defeat to Dortmund would severely harm their chances of advancing in this far more prestigious affair.

Although they are still unbeaten in the league and sit fourth in the table, City have made a patchy start to the season, have rarely played like champions and had gone four games without a win before their victory at Fulham on Saturday.

Dortmund also tasted success after two games without a win, crushing Borussia Monchengladbach 5-0 on Saturday to move up to third in the Bundesliga.

Their offensive performance against Gladbach was exactly what coach Jurgen Klopp wanted to see prior to their departure for Manchester with forward Marco Reus scoring twice, including a fine solo effort, to show he was back to his very best after a minor ankle injury a few weeks ago.

Dortmund had managed only one point in their previous two league games.

The coach, however, said Wednesday's game would be a much tougher affair and urged his players to keep their feet on the ground.

"We know how we need to really play in Manchester to have any chance to survive," warned Klopp.

"Despite our victory against Gladbach we are a long way from being excused for becoming audacious now. City are a team that is sprinkled with world stars."

Germany international Reus, who has scored four league goals in six games so far, said Saturday's win should boost their confidence as they seek to improve from last season's dismal Champions League performance that saw them finish fourth in their group.

"I hope this 5-0 will give us self-confidence and an additional push for that tough game on Wednesday," Reus said.

Klopp is expected to bring top striker Robert Lewandowski back into the starting line-up. The Poland international was rested on Saturday ahead of