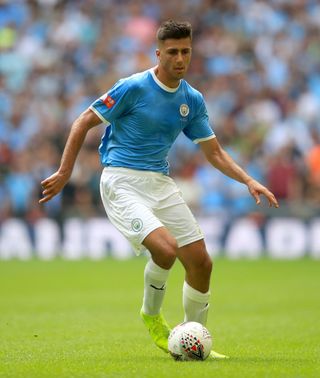 Manchester City have suffered a double injury blow with the loss of Rodri and Oleksandr Zinchenko for at least the next month.

Manager Pep Guardiola has revealed midfielder Rodri will be out until after the November international break with a hamstring problem and left-back Zinchenko for up to six weeks following knee surgery.

Rodri, who had been playing in defence to cover for other injuries, hobbled out of Tuesday’s Champions League clash with Atalanta. He is set to miss the champions’ top-of-the-table clash with Liverpool on November 10 but could return to face Chelsea a fortnight later.

Guardiola said: “They told me after the international break he will be ready again.”

Zinchenko has missed City’s last two games and this week underwent a minor procedure to repair a knee injury.

Speaking at a press conference to preview this weekend’s clash with Aston Villa, Guardiola said: “He had a contact with the knee and felt something in the bone. He’s had to stop for four or five weeks.

“He’s had some surgery to clean up the knee. It’s not a big issue but he’ll be out for five or six weeks.”

Rodri’s injury late in the first half on Tuesday led to John Stones coming off the bench to replace him.

There had been some surprise the England international, after recovering from injury himself, had not been in the side to begin with, but Guardiola stressed his selection came down to match fitness.

He said: “It’s not about first choice, it’s about being fit. For a long time he’s been injured. He’s had many many injuries. That’s why he could not play.

City have an opportunity to cut Liverpool’s lead at the top of the table to three points as they host Villa on Saturday. The Reds are not in action until facing Tottenham on Sunday.

Villa have caught Guardiola’s eye with victories in their last two matches.

Guardiola said: “They have team spirit, quality up front, (Jack) Grealish and an incredible striker in Wesley.

“They are newly promoted after a long time. They are getting good results and it looks like a good environment in the team.”

One player City could come up against is Douglas Luiz, the Brazilian midfielder the club sold in the summer.

City signed Luiz in 2017 but were unable to obtain a work permit for him initially and so loaned him to Girona twice before accepting Villa’s £15million offer.

Guardiola said: “He would be here if a work permit had been possible, but it was not. After loan-loan he is now at Aston Villa.

“I think we have an option to get him back if we like, but sometimes life is like this.

“We wanted him last season because we had problems in that position because we didn’t buy a holding midfielder.

“I think he had the quality to play with us but he could not do it. The talent was always there. We’ll see at the end of the season what his level is.”