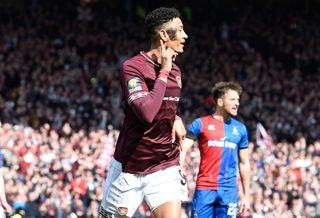 Hearts midfielder Sean Clare insists there will be no shortage of effort from his team in their cup final dress rehearsal against Celtic.

Manager Craig Levein has signalled he will take a youthful squad to Celtic Park for the clash with their William Hill Scottish Cup final opponents, six days before they meet again at Hampden.

But some more experienced players will be given the chance to stake a claim for a final place and Clare does not believe they can afford to take the game lightly in order to save themselves for the showpiece occasion.

The former Sheffield Wednesday player said: “It’s still a big game, we are going into it with full focus and aim to come out of it with a result.

“We need to play like that for us to be focused for the final. We can’t just chuck it away and think we’ll focus on the final. It doesn’t really work like that.

“Everyone that plays needs to get the most out of it they can, and go there and try to get the win.”

The 22-year-old added: “Whoever plays will go out to do their best and make it difficult for the gaffer. I don’t know if he’s picked the team already, it’s probably unlikely, so anything you can do to get yourself in that team is what we will try to do.

“So that should ensure we have a good performance on Sunday, because everyone will be up for it.”