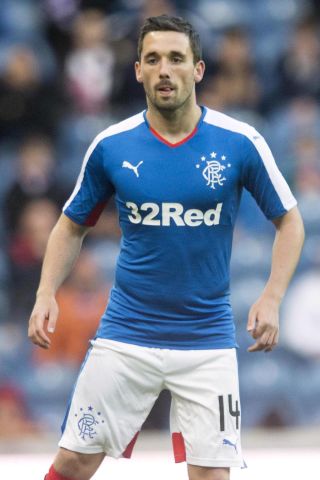 Nicky Clark hopes it will be third time lucky in the play-offs as the Dundee United forward looks to finally fulfil his Ladbrokes Premiership ambitions.

The former Rangers and Dunfermline striker has twice put himself through the emotional wringer in the end-of-season shoot-out only to walk away disappointed.

He was part of the Ibrox side who were denied promotion in 2015 as they were thumped 6-1 by Motherwell over two legs.

The 27-year-old helped Mark Warburton’s team claim the Championship title 12 months later but was denied the chance to sample top-flight action after being released at the end of the season.

He later moved on to Dunfermline but suffered yet more heartache last season as the Pars’ promotion plans were killed off by United in the semi-finals.

Now having swapped sides, he hopes to fire the Tannadice outfit up and at last get to sample life in the Premiership.

Robbie Neilson’s men head to Paisley for Sunday’s second leg after being held to a 0-0 draw by St Mirren in Thursday’s opener.

Clark said: “This is the third time I’ve been in the play-offs and they are tough.

“My memories of them are really ones of frustration and disappointment really. Obviously I lost in the final with Rangers three years ago which still hurts, I can’t lie about that.

“I was at Dunfermline last year when it was Dundee United who knocked us out and that was just as bad.

“They are right up there with my most painful experiences. Losing the Scottish Cup final to Hibs while I was at Rangers in 2016 was another sore one and it’s never nice to lose big games.

“It’s not been great so far but hopefully this year can be my year.

“You can’t let that sense of fear get hold of you or it will drag you down.

“The desire to get to the Premiership is still as strong as ever. I’ve never feared I’d make it there as this is football and you always get another chance somewhere down the line.

“And it’s not just for me, this club needs to be in the top division too.

“The manager made changes in January and it is Premiership players we have here now.

“It is going to be tough, St Mirren have picked up a lot in terms of form in recent weeks and made it hard for us on Thursday night.

“They are completely different from when we played them earlier this season in the Scottish Cup.

“But so are we and we’re confident we will get the job done on Sunday.”