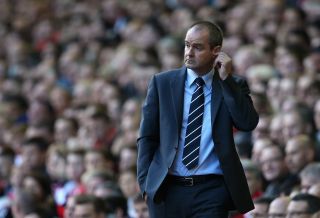 A bustling solo effort and remarkable 18-yard header from Luis Suarez set the hosts on their way to a 4-1 victory.

By the time West Brom substitute James Morrison – on for knee-injury victim Morgan Amalfitano – reduced the arrears, Suarez had completed his hat-trick, leaving Daniel Sturridge to crown a memorable afternoon for the Liverpool faithful with an exquisite chip from 25 yards.

"The best team won, we gave ourselves a mountain to climb," said Clarke.

"We started too slowly, didn't get ourselves in the game at all, and by the time we got a foothold in the game we were 2-0 down.

"Against a team like Liverpool in the form they're in, with the front two they've got, it was always going to be difficult."

Clarke, who was part of Kenny Dalglish's backroom staff at Liverpool before joining West Brom, was also left to rue a goal-saving tackle from centre-back Martin Skrtel that prevented Nicolas Anelka from reducing the arrears early in first-half stoppage time.

"A couple of minutes before half-time, if Nico had managed to get a better touch on the ball and you get to 2-1, it's different," he added.

"The third goal in the game was crucial and Liverpool got it from a set play, which is disappointing.

"The penalty put us back in the game at 3-1 and we had one or two half-chances after that. All I can say about the team is we stuck at it.

"We kept trying to go until the end and the finish from Sturridge probably put the icing on top of the cake for Liverpool and killed the game for us."