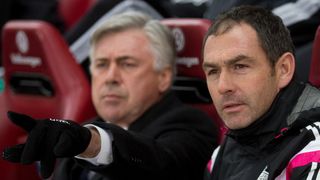 Derby County manager Paul Clement will be calling on the help of mentor Carlo Ancelotti as he plots Manchester United's FA Cup downfall.

Clement and his Derby side will welcome Louis van Gaal's struggling United to town on Friday.

The Derby manager has been at the helm of the Championship club since June after the club sacked current Newcastle United manager Steve McClaren and arrived with a high profile having spent several years working under Ancelotti - first at Chelsea, then at Paris-Saint Germain and most recently at Real Madrid.

He has managed 30 games at Derby, winning 14, drawing 10 and losing six games but knows a big upset against United would prove a massive managerial milestone and he said he would not be scared to call on Ancelotti for advice.

"I am in touch with Carlo a lot and if I really need him I know he will be there for me. I will speak to him before the game on Friday," he said.

"He’s super calm. He will tell me to work with the players, get close to the players and ignore everything else. He always used to say 'control what you are in control of.'"

Derby are winless in their last five games but remain promotion candidates with 49 points from 28 games - just six points shy of automatic promotion to the Premier League.

Clement even went as far as to suggest that should his Derby side knock United out of the FA Cup at the fourth round it would not be a giant killing - given United's poor form.

The 47-year-old manager watched first-hand as Southampton defeated United 1-0 at Old Trafford last weekend and Clement said his FA-Cup winning experience with Chelsea could be telling.

"I’m not sure it will quite be a giant-killing if we get a good result on Friday but it will be an upset, and we all know there has been lots of those over the years in the FA Cup," he said.

"Assuming we perform well, it's a fantastic opportunity – both clubs are in a difficult period. United have had an awful December and a mixed January and we've been going through a tricky period.

"But I’ve won the FA Cup twice before with Chelsea and we’ll be going strong. It’s a challenge we are really looking forward to up against a team that is not in great form but is a massive club with a great history, and you know on any day they can produce a great performance."