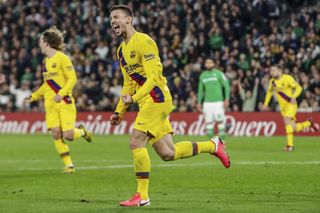 Barcelona ended a tough week on a high with Clement Lenglet scoring the winner before being sent off as Quique Setien overcame former club Real Betis in a thrilling 3-2 comeback win.

As if a public spat between star turn Lionel Messi and sporting director Eric Abidal was not enough, Barca were knocked out of the Copa del Rey by Athletic Bilbao on Thursday.

Betis looked set to compound Barcelona’s blues at the rocking Estadio Benito Villamarin three days later, only for the visitors to twice come from behind before former Sevilla defender Lenglet wrapped up a 3-2 victory.

It was a welcome shot in the arm for Setien against the club he managed for the last two seasons, with Barca ending the weekend within three points of table-topping rivals Real Madrid.

But this was not a straightforward win. Sergio Canales’ early spot-kick put Rubi’s men ahead, only for Frenkie De Jong to swiftly level from a superb Messi pass.

Nabil Fekir’s outstanding finish fired Betis back ahead midway through the first half, only for Sergio Busquets to controversially level for Barcelona deep in first-half stoppage time.

Betis goalkeeper Joel Robles did well to keep Messi at bay after the break, only for Lenglet to find a winner with an outstanding header from the Argentinian’s free-kick.

But the drama did not stop there. First Fekir received his marching orders for showing petulance after being booked, with Lenglet soon following him down the tunnel as it ended 10 men apiece.

It was a captivating encounter for the 54,526 in attendance at the Benito Villamarin, where the video assistant referee intervened during the early exchanges.

Referee Jose Maria Sanchez Martinez was advised to go to the pitchside monitor, then handed a spot-kick to Betis and a booking to Lenglet for handling a Fekir attempt. Canales coolly sent Marc-Andre Ter Stegen the wrong way in the sixth minute.

However, just three minutes later Messi showed superb timing and skill to clip an exceptional pass to De Jong, who controlled the ball on his chest and smashed home.

Setien applauded on the touchline after a goal that appeared to unshackle Barcelona, with De Jong looking bright in midfield and Messi proving a thorn in the side.

Robles superbly smothered the Argentina star’s close-range strike in the 23rd minute and moments later Antoine Griezmann fluffed his lines after the visitors’ star again got behind.

Betis were largely holding their own and emphatically punished some sloppy Barca play in the 26th minute, with Arturo Vidal’s carelessness picked off as the hosts broke and Fekir smashed a low strike past Ter Stegen.

Play became tetchy as bookings stacked up before the break, which Barcelona went into level after Busquets controlled a floated Messi free-kick and directed home deep in first-half stoppage time.

Apoplectic Betis players surrounded the officials at the half-time whistle, having been convinced of a foul in the build-up to a leveller that the visitors looked to build on.

Robles produced a fine stop to deny Messi within minutes of the restart, with the ex-Wigan and Everton goalkeeper again having to be alert when the forward burst free to get away another strike in the 62nd minute.

Messi nearly clipped a stupendous goal as Barcelona upped the ante, with the pressure finally bearing fruit in the 72nd minute.

Lenglet did well to meet a fine free-kick from Barca star Messi, with his header beating Robles, finding the far corner and hushing the home crowd.

Barcelona attempted to take the sting out of proceedings after taking the lead for the first time, but tensions boiled over as the match closed down.

Fekir received his marching orders in the 76th minute after angrily reacting to the booking handed to him for a late challenge on Lenglet.

Three minutes later and Barcelona’s match-winner saw red, having picked up his second yellow card for a foul on substitute Joaquin.