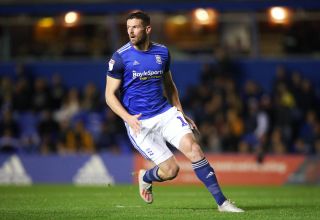 Birmingham caretaker head coach Pep Clotet saluted the character of Lukas Jutkiewicz after the striker went from villain to hero in their 2-1 win over Luton.

Jutkiewicz headed home an 82nd-minute winner after earlier committing one of the biggest misses to make it three straight home wins for Blues and five in six at St Andrew’s.

Left-back Kristian Pedersen put Blues ahead in first-half time added on only for substitute Harry Cornick (67) to level within seconds of his arrival before Jutkiewicz’s first goal in eight games.

Clotet said: “I think ‘Jukey’ is very strong mentally. He’s a key player for us because in the position he plays, he never gives up and he’s very positive – he always thinks he can get something out of a situation.

“He always gives everything he has and this was from playing three games in a week.

“That performance shows character, resilience and shows he knows exactly what this game was about.”

Jutkiewicz missed an open goal from two yards when he slid in and diverted Kerim Mrabti’s cross well wide at 1-0.

But Clotet defended him, saying: “From the bench it looked like he could make it but in reality it was further away and he could not reach it – that’s what he told me. But I will watch it again.

“He’s very important for tactical reasons because he’s a dominant striker in the Championship – the opposition have to put double the effort on him, which means they have to put one and a half or two centre-backs on him, which frees a second striker up.”

Blues missed a host of chances as goalkeeper James Shea played a blinder.

But Clotet added: “It was very similar to our game against Middlesbrough where justice was done in the end.”

Luton manager Graeme Jones is to look into making an official complaint after his team were forced to play a second successive away game three days after Wednesday’s 3-2 defeat at Fulham.

Blues had an extra day to prepare having beaten Blackburn 1-0 on Tuesday night.

Jones said: “We are at a disadvantage and it is not right. The lack of recovery affects team selection.

“People don’t really realise unless you are a professional how much 24 hours matters.

“It’s already difficult enough. The most important part of the game is recovery and being mentally and physically fresh for every game.”

Asked if his side was weakened, Jones added: “Absolutely, yes. Whoever it is – the authorities, the EFL, is it really that difficult to look at a fixture list and make it a level playing field?

“Give people a chance, come on. If the teams playing each other on a Saturday play the same evening, no problems at all.

“It’s not right. It’s not fair. That’s my disappointment.”

Jutkiewicz’s winner condemned the struggling Hatters to a third straight loss on the road.

Jones said: “We are just getting to the stage of the season when being positive about performances is not enough.