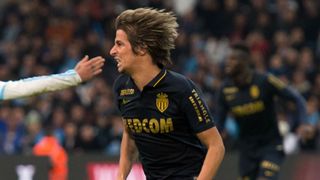 Real Madrid defender Fabio Coentrao wants to make his loan move to Monaco permanent and help them challenge for silverware.

The left-back joined the Ligue 1 outfit on a one-year loan deal ahead of the 2015-16 campaign and has become an important part of the first team after overcoming a hamstring problem.

The 27-year-old has made 11 league appearances for Monaco this season and is determined to prove his worth in the second half of the season.

"I came here to help Monaco achieve their goals and clinch second place in the table," Coentrao said at a news conference.

"I am very happy at Monaco and I am sure the club will be among the title candidates in the years to come. So I cannot see any reasons why I would not want to stay here.

"I played very little last season, so I knew I would struggle a bit early on. But I am getting better and better physically and I want to show my true face in the next four months."

Coentrao, whose contract with Madrid runs until June 2019, will be working under Zinedine Zidane if he were to return to the Santiago Bernabeu and he feels the Frenchman is the right man for the job after succeeding Rafael Benitez.