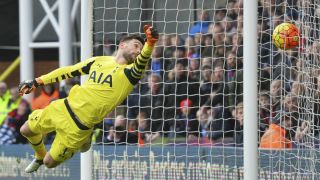 Hugo Lloris believes Tottenham's great team spirit could prove to be vital in their chase for silverware as they prepare to take on Colchester United in the fourth round of the FA Cup.

Mauricio Pochettino's men have been in sublime form this season and are still in the running to potentially win the Premier League, Europa League and FA Cup.

The League Cup in 2007-08 represents the last time Spurs lifted a trophy, but Lloris is hopeful of ending that wait in 2015-16.

"Team spirit is one of the key things for the next three or four months – we have to do it all together," Lloris told the official Spurs website.

"We have to push ourselves together. Spirit is so important in football because it's a collective sport and of course we need more – we need fitness, tactics and technique – but it's true that it’s much easier when the spirit is great.

"Being a footballer is fantastic but it's even more fantastic when it's like this because every day is a good day to share and you're happy to go to work and put the effort in to win.

"We always want to improve and to develop our mentality to become a winning team. The road is still long but we feel we are improving all together and we are starting to be very hungry for the next few months and next few years.

"The team is young but we are nearly at the level to be ready to compete [for trophies]. It's just a matter of time but, with this mentality and this atmosphere, things are improving quicker than normal."

Tottenham have not progressed beyond this stage since reaching the semi-finals in 2012, with Leicester City, Arsenal and Leeds United ending their cup dreams over the past three seasons.

Spurs' form this term gives them reason for optimism, however, having lost just three times in their past 20 games in all competitions. Additionally, Pochettino's men have scored in 14 successive competitive games away from home.

Hosts Colchester, meanwhile, will be fully aware of their underdog status heading into the game.

Kevin Keen's side dropped to the foot of the League One table following their 3-0 defeat at the hands of Scunthorpe United on Saturday. The Essex club saw off Wealdstone, Altrincham and Charlton Athletic on their way to the fourth round of the FA Cup, but have been struggling in the league and are without a win since October.