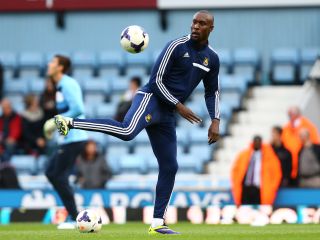 The 30-year-old was released by manager Sam Allardyce at the end of last season but rejoined the Upton Park club earlier in the month amid a striker shortage.

And Cole, who has spent time playing with the Premier League side's Under-21 squad, is keen for a swift return to the first-team ranks.

"I want to get back into the thick of things now," he told the club's official website. "I had a taste of the bench on Saturday against Manchester City and I just wanted to get on so much.

"The manager felt it was best not to throw me in at the deep end so fast, to try and get this game (Under-21s' 2-0 victory over Wolves) under my belt and be available for selection in the other first-team games.

"Obviously I've come in and played with the young boys who are developing into Premier League players. I've just wanted to act as a good influence upon them and at the same time get some minutes under my belt, which the manager has asked me to do.

"Hopefully I can convince the manager to get me in the squad, coming on as a sub or even starting a game sometime soon.

"It looked like I was leaving and now I'm back, so hopefully I can make a good impression in my time here."