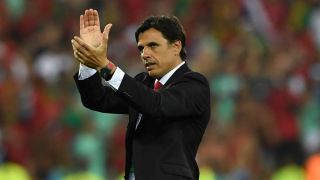 Chris Coleman has been awarded the freedom of his hometown Swansea following his terrific performance as Wales manager at Euro 2016.

The former Swansea City, Crystal Palace, Blackburn and Fulham defender had his playing career cut short by a car accident, but he has not let that stop him from enjoying a successful career in football.

He took the reins of Fulham as manager before spells at Coventry City and Real Sociedad in Spain led him to an eventual role in the Wales national team setup, where he initially served under good friend Gary Speed.

Speed took his own life in 2012 and Coleman stepped into the role in difficult circumstances, but has since excelled in the job having led the country to their first major international tournament in 58 years.

In France, Wales stunned everyone making the semi-finals where they eventually lost to eventual winners Portugal.

Swansea lord mayor, councillor David Hopkins, said: "Freedom of the city is the highest honour the people of Swansea can confer on one of its own.

"And after the amazing, incredible exploits of the last month in France, I think I can safely say everyone in Swansea believes it's richly-deserved."