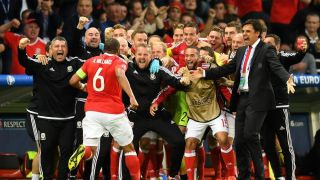 Chris Coleman's Wales might be busy writing new chapters in the footballing history of their nation, but he says it is important to remember the past.

Usually considered minnows, Wales have shocked the footballing world with their run to the Euro 2016 semi-finals.

They topped their group, which included England and Russia, before beating Northern Ireland in the round of 16.

However, their latest triumph – a 3-1 quarter-final win over Belgium – was their biggest yet, setting up a semi-final date with Portugal.

"We can never forget what it's taken to be here, what our vision is. And we just stick to that," Coleman said.

"You can't always go into a game and control the result, all you can do is control the performance. We never played it down, I said 'get carried away, expect from us' and that's what we've done.

"I wouldn't say that if I didn't think my team was good enough."

Despite making the semi-final, Coleman insisted he is not thinking about taking out the tournament just yet.

"I don't think about winning the tournament, what we thought about was get out of the group, then beat Northern Ireland, then beat Belgium," he said.