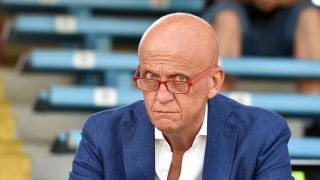 Former World Cup final referee Pierluigi Collina admits he would have been "frustrated" working alongside a video assistant, after a decision was made to trial using replays in football officiating.

FIFA president Gianni Infantino announced on Saturday that the International Football Association Board (IFAB) had approved tests before implementing live experiments for the 2017-18 season.

The IFAB meeting in Wales also saw the abolishing of the 'triple punishment' of players who give away a penalty being sent off, and subsequently suspended.

"If I were a referee today, I'd be frustrated at being judged based on images that I don't have access to and had nothing to do with my skills," Collina told La Gazzetta dello Sport.

"Infantino said we need to be open to the development of football and I agree. Now we'll see, we'll study and then decide if and how it can be applied to a match situation.

"The objective is to respect the fluidity of the game. Rugby has realised technology can be invasive and will perhaps take a step back."

Collina added on other rule changes: "Above all I am pleased at the abolition of the 'triple punishment' – red card and penalty for stopping a goal-scoring opportunity – because football has been asking for this for years. Infantino did well to convince the board.

"We do need to still revamp the offside rules, as today the job of the assistants is at the limits of what the human eye can achieve.

"Comparing the foot with the head, at different levels with a few centimetres of difference, is almost impossible."