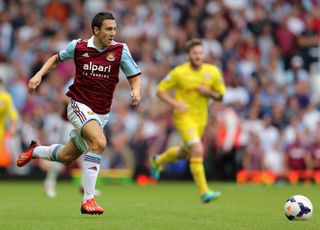 The 29-year-old completed the move from Liverpool on Tuesday and made a brief but encouraging cameo in 2-0 home win over Cardiff City.

Collins saw promise in the display and is also anticipating the moment when Downing links up with his former Anfield team-mate Andy Carroll, who is sidelined with a heel injury.

"Stewart looked very sharp - he's always the same," Collins said. "I played with him at Villa and believe that we have got an absolute bargain.

"Hopefully we've got the Stewart Downing of a couple of years ago when he was tearing defences to pieces at Aston Villa.

"Obviously it didn't go well for him at Liverpool, but he did very well against Cardiff and hopefully we can get him firing.

"The thought of him playing with Andy is great. They played together at Liverpool and they get on well off the pitch as well.

"They are both from the north east so have that certain understanding, which could be great for us."