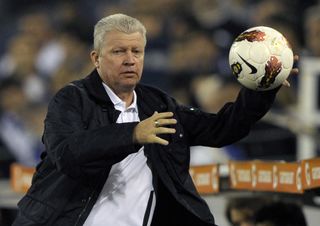 Miguel Borja scored a brace with goals in the sixth and 58th minutes as it seemed like La Equidad would cruise to victory over Santiago Escobar's men.

But a red card to Equidad defender Daniel Briceno on 71 minutes threw the game wide open.

In the 91st minute, substitute Martin Minadevino got one back for Caldas before Equidad's Geisson Perea scored an own goal with the last kick of the game in a thrilling finale.

Junior climbed to third on the standings after a 5-1 thrashing of Cucuta Deportivo.

Despite going behind to Cucuta after 17 minutes through Luis Payares, Junior led four minutes later after quick-fire strikes from Luis Ruiz and Edwin Cardona.

Cardona grabbed his second in the 37st minute as Junior started dominating the contest.

Michael Ortega and Jherson Cordoba both struck in the second half to complete the rout before Cucuta substitute Geovanni Garcia was given two yellow cards in four minutes.

Two goals in each half saw Medellin claim a well-earned 4-0 win at Envigado.

Goals to German Cano and Marcos Perez got Medellin off to a quality start in the first half, silencing the home fans.

Cano added another early in the second half before Dairo Mosquera rounded off a superb victory.