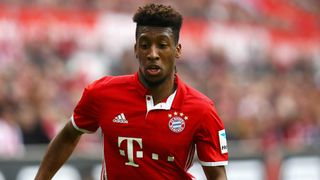 Kingsley Coman has admitted that he considered leaving Bayern Munich after an underwhelming 2016-17 campaign.

The France international struggled to build on his impressive first season at the club this term as he made just 19 Bundesliga appearances, in which he scored twice.

Bayern still opted to turn his loan spell from Juventus into a reported €28million permanent move, and the winger is keen to fight for his place after the champions convinced him he still has a role to play at the Allianz Arena.

"It was a complicated year for me," Coman told Kicker. "I thought about leaving Bayern.

"It is very difficult to win a place in the team and get regular first-team action once the coach has found his XI, in particular here at Bayern due to the stiff competition for places.

"But Bayern gave me the feeling they count on me on the long term, including next season. They told me to keep working hard and then things will work out."