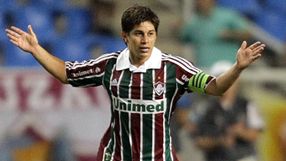 Having lost the lead last weekend with a draw at home to lowly Goias, Fluminense took advantage of a slip by Corinthians, who were held 1-1 at relegation candidates Vitoria, to snatch a one-point lead with two matches to go.

Flu have 65 points, Corinthians 64 and Cruzeiro 63 after a 3-1 win over Vasco da Gama, promising a nail-biting finish.

"We mustn't get over-excited... we must keep our feet on the ground. I'm sufficiently experienced not to get over-excited. There are two games to go and we still have to be very conscious of that," Flu coach Muricy Ramalho told reporters.

"I'm certainly happy with our place in the (2011) Libertadores Cup. That's very important for Fluminense," added Ramalho, who won the Brazilian title three times with Sao Paulo between 2006 and 2008.

Gum headed Fluminense in front from a corner in the 36th minute then equalised for the home side with an own goal 10 minutes after half-time.

Sao Paulo then lost defender Xandao and midfielder Richarlyson, sent off for violent fouls between the 63rd and 70th minutes.

Conca profited from the greater space against nine men to hit a lovely left-footed volley and put Flu ahead 15 minutes from time.

Three minutes later, goalkeeper Rogerio Ceni parried a shot by Conca and striker Fred netted the rebound before the Argentine scored again from outside the box two minutes from time.

Sao Paulo fans were as happy with the victory as the visitors because their arch-rivals Corinthians had been displaced as leaders.

Fred recalled that Fluminense, looking for their second national title since 1984, only just escaped relegation in their final match last season.

"We got out of that difficult situation last year to now be fighting for the title. We had to control our anxiety, we talked on the pitch about playing the ball around. We managed to do that."

Corinthians suffered an extra disappointment because former Brazil striker Ronaldo suffered his fifth thigh injury since January after half an hour and will miss the run-in.

Outgoing champions Flamengo virtually ensured they would not be relegated with a 2-1 home win, only their ninth victory in 36 matches, over Guarani in Rio on Saturday.