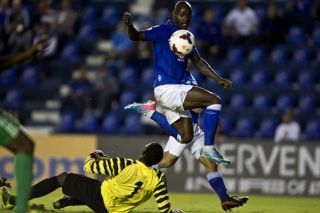 In Group 3, Cruz Azul - five-time winners of the competition - only need an honourable loss at home to Herediano at the Estadio Alejandro Morera Soto on Tuesday.

The visitors must win 3-0 or better to progress into the knockout stages.

The Mexicans are top of the table by three points and won the previous meeting between the teams in Mexico City 3-0.

In Cameroonian attacker Achille Emana (three goals), Cruz Azul have one of the competition's top-scorers this season.

Coming into the clash after a crucial Liga MX meeting with leaders America on Saturday, coach Guillermo Vazquez may have big selection decisions to make.

Herediano will need goals in front of their home fans and have had no problems scoring in the league this season.

On the final matchday of the group stages, all bar two places remain up for grabs.

America, also five-time champions, are going to need a win to advance from Group 4.

They host Costa Rican group leaders Alajuelense at the Estadio Azteca and a 1-0 victory will be enough because of their superior goal difference.

There are three MLS sides also chasing a place in the quarter-finals.

The Houston Dynamo only need a draw at Panama's Arabe Unido to progress to the last eight from Group 1.

Sporting Kansas City are in a similar situation in Group 2 as they prepare to host Honduras' Olimpia, with a point all they need.

But the San Jose Earthquakes need a victory at home to Guatemala's Heredia to finish top of Group 5.

Toluca are in prime position to advance from Group 6 ahead of their meeting at home to Comunicaciones of Guatemala.

Tijuana and the Los Angeles Galaxy are the only two teams already through, with the latter visiting Isidro Metapan in Group 8.

Victoria and Luis Angel Firpo do battle in Group 7, which will be topped by Tijuana regardless of the result.