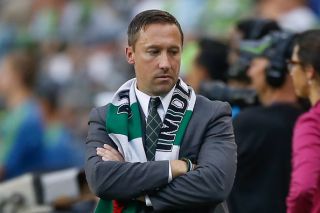 The Timbers were held to a frustrating 0-0 draw by Real Salt Lake in the MLS on Friday as they attempt to qualify for the play-offs but have an equally important game on Tuesday when they travel to Honduras to play Olimpia.

Real goalkeeper Nick Rimando put in a man-of-the-match performance at Providence Park in Portland, denying the Timbers with a number of top-line saves.

The draw means Vancouver Whitecaps are in pole position to claim the fifth play-offs spot in the Western Conference ahead of Portland.

But with a draw in Tegucigalpa enough for Portland to secure a spot in the quarter-finals of the Champions League, Porter has urged the Timbers to move on from their scoreless stalemate in the MLS.

"The guys gave everything they had, they left it all on the pitch," Porter told the Timbers' website after the draw with RSL.

"They couldn't have given anything more. We need to recover mentally and physically and we need to get our focus locked in on our next game, the Champions League game, and getting out of the group stage.

"That was my message to the guys. I was proud of them. Let's move on."

The Timbers lead Group Five on nine points having won all three games so far but with Olimpia on six, a loss to the Hondurans could see Portland miss out on the last eight.

Olimpia, however, would need to beat Portland by six goals as their goal difference (plus five) is significantly lower than that of Porter's side (plus 11).

Hector Vargas' Olimpia did test the Timbers in their visit to the United States in September though, coming from behind twice to be level at 2-2 at half-time, before the home team pulled away to win 4-2.

"We need to compartmentalise and move away from the league and get focused on getting a good result on the road against a very good Olimpia team," Porter said.

Reigning champions Cruz Azul must at least draw at Group Six leaders Alajuelense on Tuesday to reach the quarter-finals.

Cruz Azul (plus two goal difference) trail Alajuelense (plus one) by one point.

Alajuelense have won six of their past seven games at the Estadio Alejandro Morera Soto with the other match ending in a draw, while Cruz Azul have lost three of their past four away matches in the Champions League.

In Group Two, Sporting Kansas City can advance even with a three-goal loss to Deportivo Saprissa on Thursday, while in Group Eight it will be winner-takes-all when Mexico's America face Comunicaciones of Guatemala, with both clubs on seven points at the top of the standings.