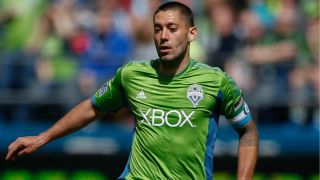 Clint Dempsey scored twice, but Club America rallied twice to earn a 2-2 draw at the Seattle Sounders in the first leg of their CONCACAF Champions League quarter-final.

The match was scoreless until the brink of halftime as both teams exchanged goals at CenturyLink Field on Tuesday.

Dempsey opened the scoring in the 44th minute with a brilliant curling free kick, but Carlos Quintero struck back immediately for the reigning champion with a crucial away goal just seconds later.

It took just seven minutes into the second half for Dempsey to find the net again, with the United States international heading in from a corner.

However, America was able to find another equalizer, this time Oribe Peralta poking home from a delightful lob over the Sounders defense as the visitors claimed a second important away goal 20 minutes from the end.

D.C. United suffered a massive blow to its final-four ambitions after suffering a 2-0 loss at Queretaro. United put in an inspiring shift and managed to limit Queretaro's attack for most of the game before coming undone in the 71st minute.

Yerson Candelo lined up a shot from outside the box that rocketed into the top corner of the goal, leaving United goalkeeper Andrew Dykstra with no chance.  Queretaro managed to double the lead seven minutes from time, with Edgar Benitez ensuring a comfortable lead for the Mexican outfit heading into the return leg.