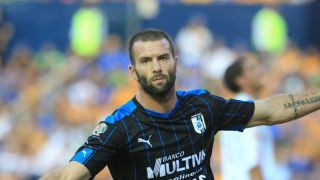 Villa struck four times in the second half as Queretaro piled on six goals after the interval at their Estadio La Corregidora to take control in Group C.

Queretaro surged to seven points with their second win from four matches, while San Francisco (3 points) and Verdes (1) have played two games each.

Kevin Gutierrez gave Queretaro the lead in the 15th minute, while Villa made it 2-0 on the half-hour mark with a near-post header.

Villa struck twice in the space of three minutes early in the second half to complete his hat-trick, while Queretaro would score four goals in the last 10 minutes to wrap up their victory.

Sinha scored in the 81st minute, while Villa added another goal four minutes later, with Danilinho following soon after and Queretaro's man of the match notched his fifth goal in the 90th minute.

Villa has scored 14 goals in Queretaro's past 10 matches in all competitions.

In El Salvador, Isidro Metapan stunned Herediano 2-0 as Group B tightened up.

Isidro had lost their first two matches but notched three points on Thursday to move within a point of Tigres UANL and Herediano.

In Group D, Central defeated Comunicaciones 1-0 to notch their first points of the 2015-16 CONCACAF Champions League.