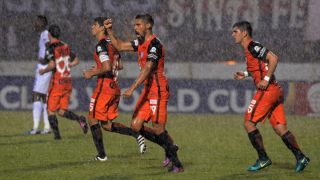 Pachuca reached the CONCACAF Champions League quarter-finals as the Portland Timbers failed to do likewise.

Liga MX giants Pachuca gave up a lead to draw 4-4 at Olimpia in Tegucigalpa on Wednesday, but it was enough to secure their spot

The draw wrapped up Group E for the Mexicans, who finished top with 10 points and three clear of Olimpia – who needed a victory.

The lights went out and caused a delay during the clash in Honduras, where Pachuca seemed in control before a late comeback.

Victor Guzman headed Pachuca into the lead before Romell Quioto cancelled that out with a header of his own.

A 25-yard Jonathan Urretaviscaya free-kick and Erick Gutierrez goal seemed to have the visitors in control.

However, Olimpia fought back again, Carlo Costly tapping in and Carlos Mejia scoring from the penalty spot, but that was all they could manage.

In Group B, Deportivo Saprissa progressed by a point ahead of Portland after the Timbers could only manage a 1-1 draw at home.

Sporting Kansas City recorded their first win in Group C, beating Central 3-1 as both were eliminated.