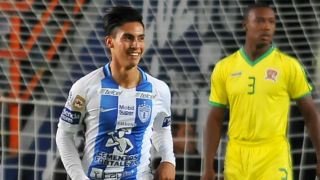 Vancouver, who defeated Central FC in their group opener, made it two wins from two with a 3-0 win over Sporting KC.

Cristian Techera was the man of the match for the Whitecaps, with the 24-year-old Uruguayan finding the net either side of Erik Hurtado's strike.

The Whitecaps are now top of Group C with six points, with Sporting KC and Central on one after two games.

Pachuca were also able to keep up their 100 per cent record from their opening two fixtures, seeing off Police United in another 3-0 result.

The scores were locked at 0-0 until just after the hour-mark, with the club from Belize proving difficult to break down.

But Erick Aguirre was able to break the deadlock in the 62nd minute, with Mexico international Hirving Lozano and Uruguayan Jonathan Urretaviscaya adding to the scoreline.

The victory sees Pachuca move three points above Olimpia in Group E, with Police United bottom without a win after matchday two.

In the day's other result, Alianza and Antigua GFC played out a 1-1 draw in their Group F fixture.