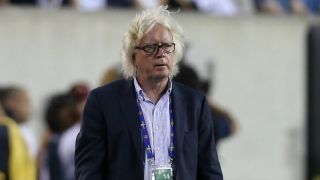 Jamaica bounced back to see off Nicaragua and keep their World Cup hopes alive, with a 4-3 aggregate win in the third round of CONCACAF's qualifying.

The fourth-ranked team from the region were 3-2 losers at home to the world number 139 Nicaragua, but Winfried Schafer's men were 2-0 winners on the road in Managua on Tuesday.

Late substitute Simon Dawkins' 90th-minute goal ensured the Jamaicans of progression to the group stages, after Darren Mattocks had earlier struck in the 13th minute.

The other nation to turn around a first-leg deficit was Guatemala, who ousted Antigua and Barbuda 2-1 on aggregate.

The Guatemalans trailed 1-0 heading to their home leg in Guatemala City, but Carlos Ruiz and Dennis Lopez scored crucial second-half goals for Ivan Sopegno's men in a 2-0 second-leg triumph.

St Vincent and the Grenadines, Haiti and Canada all turned healthy first-leg leads into fourth-round appearances, although the former were tested at Aruba.

Cornelius Huggins' St Vincent and the Grenadines saw their 2-0 advantage wiped out by an Erixon Danso brace, before Tevin Slater's 84th-minute goal was enough to secure the visitors to Oranjestad an aggregate victory.

El Salvador earned back-to-back 1-0 victories over Curacao, an early goal - from Jonathan Barrios - again all they required to win on the night.