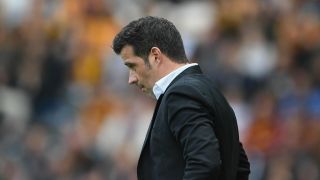 Marco Silva's strong connection with Hull City supporters will not necessarily be enough to persuade the Portuguese to stay at the club in the Championship next season, the coach says.

Already-relegated Hull were thrashed 7-1 at home by Tottenham in their last game of the Premier League campaign on Sunday, with Harry Kane scoring a hat-trick for the second match in a row as Silva's side collapsed.

Silva remains undecided about his future ahead of a planned meeting with the club's board, while Watford are reported to be interested in appointing him to the vacancy at Vicarage Road following the departure of Walter Mazzarri.

"I need to think and decide what is best for my career," Silva said.

"If I only look for the connection between us and the fans it would be impossible to say no, but there are other things.

"It is a moment I need to analyse the best way for the club and for myself. I don't decide anything now.

"I agree the last two results show what a big job this will be in the summer."

I don't blame the fans that left after that shambles! But fair play to the fans that stayed even though we weren't deserving of it  May 21, 2017

"I'm disappointed. I'm upset," he added. "I am really disappointed because it is not like we work during the week, it is not how we prepare for the match.

"We didn't play this afternoon and in the last game as well we made a lot of mistakes.

"The only positive thing this afternoon is the respect of our fans for our team. They came to the stadium and really they deserved something really different from our team because we didn't play.