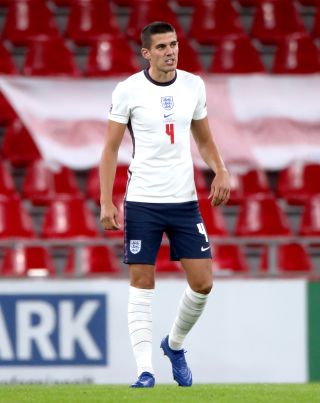 Conor Coady has praised the support of Jamie Carragher after the Wolves captain made his England debut in Tuesday’s Nations League draw in Denmark.

The 27-year-old looked right at home in the middle of Gareth Southgate’s three-man defence as he stood out on a night where England toiled to a goalless stalemate.

Despite being his international bow, Coady could be heard bellowing instructions and support to his more established team-mates inside the empty Parken Stadium.

Speaking on Sky Sports after the game, Carragher – who was a fixture in the Liverpool first-team as Coady came up through the ranks before leaving Anfield in 2014 – revealed he had spoken to him ahead of his debut, telling him to “be himself”.

“I will be honest with you it is fantastic, he has been brilliant with me since I was young boy at Liverpool coming through,” Coady replied when asked how much it helped being able to call on someone with the experience of Carragher – who won 38 England caps.

“He has been absolutely fantastic and ever since I left Liverpool he has dropped me the odd text, we’ve done a little bit on Sky Sports as well.

“He is a massive influence for me, he really is, because he is someone I looked up to as a kid to see how he defended and I learnt a lot off him.

“I watched a lot of him as a centre-half, how he organised, how he did things and whenever he says good things about me, it is an incredible feeling because what a player he was and he was someone I looked up to massively as a kid so it is fantastic.”

Coady was handed his debut alongside Leeds midfielder Kalvin Phillips, while Jack Grealish and Ainsley Maitland-Niles were both later introduced off the bench for their first taste of senior international football.

While Phillips said he intended to give his first England shirt to club manager Marcelo Bielsa after the Argentinian had written him a note and presented him with a Newell’s Old Boys jersey, Coady insists his will stay closer to home.

“I’ll be honest with you it is going to go up in my house, first and foremost,” he said.

“It’s an honour to to play for my country, so to finally get that shirt and have it with obviously the date and the fixture on the front and the name on the back with the number four, it is incredible.

“It’s not quite sunk in yet but it is certainly going on the wall in the house and it’s something I’ll cherish and remember the rest of my life.”