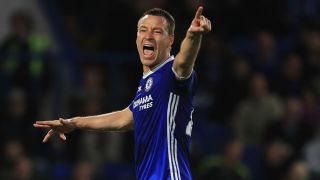 Chelsea manager Antonio Conte wants John Terry to postpone retirement and play on after his final game for the club on Sunday.

The former England captain will leave Stamford Bridge when his contract expires at the end of season after winning 17 trophies in 19 stellar years in the first team.

Terry has hinted he could call time on his career but a number of Premier League clubs have been linked with the 36-year-old, including Swansea City, whose top-flight survival was secured when Hull City lost 4-0 to Crystal Palace last week.

Conte has compared his captain to one-club greats in Italy, including Francesco Totti of Roma and former AC Milan defender Paolo Maldini, and has backed him to keep playing.

"John has all the possibility to continue his career," he told a news conference on Friday. "We all know that he is preferring to play regularly and, for this reason, he's decided to leave.

"He's strong. In the moment I called on him to play, he showed this. When you arrive at this point of your career, it's very important to feel your body, to feel your mind, to feel if you still have the desire and will to fight and arrive every day working very hard.

"If you feel this, then it's right to continue your career. I think John has all these characteristics.

"It's very difficult to find a lot of players with this kind of career. John is a legend, a legend for this club. For the appearances, for the years he's played for this club, and above all for his victories with this club.

"It's not easy to compare, but, for sure, Totti played for Roma all his career. The same as [Juventus great Alessandro] Del Piero, Maldini at Milan... I think John is a champion and he deserves the best."

Conte says it will be a "surprise" whether Terry starts against Sunderland on Sunday in what would be his final match for Chelsea and spoke highly of the performances of Gary Cahill, who has worn the armband in his stead.

However, he insists it is too early to say if Cahill will become captain on a permanent basis from next season.

"For sure, Gary has good prospects of being captain, but now it's important to finish the season," Conte said. "To start to think about next season is very dangerous because we have different targets still to reach."