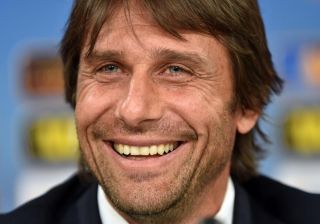 The Turin giants head into Thursday's second leg with a 2-1 deficit to overturn after a stunning Lima strike at Estadio da Luz consigned them to defeat.

Juve, who could seal another Serie A title this weekend, have the incentive of a mouth-watering final at their very own Juventus Stadium next month if they can get past the newly crowned Primeira Liga champions.

Not since their 1996 UEFA Champions League success have the Italian champions won a trophy in European competition, but coach Conte is bullish over their chances of dumping Benfica.

He said: "I think we put in a fine display in Lisbon. It's not easy, particularly psychologically. When you concede after two minutes.

"I think there was only one team in it during the second half that could have, with greater precision, scored more.

"The game will be played over 95 minutes, we know what we need to do. I'm very confident, I know we'll have Juventus Stadium behind us."

The former Italy midfielder knows his side will have to be wary of the threat posed by the Lisbon outfit on the break, but stated that the game holds no fear for his players despite what is at stake.

"Benfica played very much on the counter-attack in the first leg and we need to watch out for this tomorrow night." he said.

"The word fear isn't part of our vocabulary. We know we deserve to be in a European semi, it's an exciting moment."

Conte revealed that Arturo Vidal (knee) trained on Wednesday and is available for selection, but refused to give away whether the Chile midfielder would start.