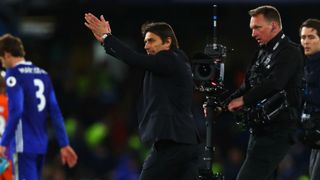 Antonio Conte wants his Chelsea side to assume Tottenham will win all their remaining games in the Premier League title race.

Conte's men took a significant step towards glory on Wednesday as a pair of first-half goals from Eden Hazard secured a hard-fought 2-1 win over Manchester City at Stamford Bridge.

It marked an ideal response to last weekend's shock defeat by the same scoreline against Crystal Palace and preserved Chelsea's seven-point advantage at the summit.

"I think that the most important thing is to look at ourselves. It is very important, this," Conte told BT Sport.

"We must think that Tottenham can win all the games. For this reason we need to get 18 points to win the title.

"I think we are playing a great season bit to win the title there is a long way to go.

"For sure, this is another step, a big step against a great team because I think that Manchester City is a really great team. It's difficult to play against them.

"We showed we can be a great team to win a difficult game after losing to Crystal Palace.

"It was not easy to reply in this way and I am satisfied for this."

Hazard assuming the role of matchwinner has become an increasingly familiar sight for Conte, who challenged his playmaker to extend his stellar form until the end of the campaign.

"Eden is playing very well. His commitment is great. He scored two goals but his commitment, his work for the team was very good," he said.

"He must continue in this way because now there are eight games to go and it's important to play well as this type of player, who has a great talent."

“You need individuals to win you titles”A winner hails the contribution of after ... April 5, 2017

Zouma was withdrawn at half-time but Conte eased any fears over a fresh injury for the 22-year-old, explaining he introduced Nemanja Matic to reinforce Chelsea's midfield as David Silva and Kevin De Bruyne shone for the visitors.

"It was only a tactical change," he added. "I think Kurt played very well in the first half but we suffered too much in the midfield and for this reason I preferred to pick Matic and reinforce our midfield

"I think it was right because in the second half we didn't risk."