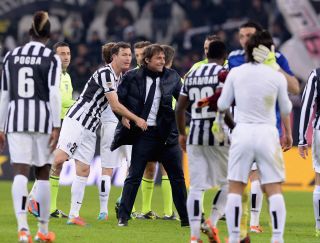 But with half of the 2013/14 season remaining, Conte warned Juventus to stay focused, arguing the eight-point margin could easily be whittled away before the end of the campaign.

"I am only ever moderately satisfied until we achieve our targets, so this remains a stepping stone, but nothing definitive," Conte told Sky Sport Italia.

"Our satisfaction therefore has to remain moderate.

"There's an entire second half of the season to go and we must do well. These eight points are important but must not become an illusion, as if they rob us of the concentration and desire we need then we'll be in real trouble. Anything could happen.

"Let's not forget that Roma won their opening 10 games, yet in week 18 we are eight points in front of them."

Arturo Vidal, Leonardo Bonucci and Mirko Vucinic all scored for Juventus in their victory over Roma with the capital club ending the match with just nine players after Daniele de Rossi and Leandro Castan both received red cards in the second half.

Conte paid tribute to his players' winning mentality, while underlining the importance of Spanish striker Fernando Llorente to Juventus' campaign.

"I think the desire to win is a philosophy of life and I tried to transmit that to my players," the 44-year-old said.

"There are others here who already know what that means, like Gigi Buffon and Arturo Vidal. They all realised it's great to win and want to continue doing it, but to achieve that you need great humility, hunger and the willingness to work for one another.

"Just look at players like Carlos Tevez and Fernando Llorente who come back and actively take part in the defensive moves, not like old-fashioned strikers who would stand up there and wait for an assist to score.

"Llorente is a very important player for us who, after two months of apprenticeship, has settled right into the team. He holds up the ball, spreads the play for his team-mates and is strong in the air."

Conte also discussed his team's elimination from the UEFA Champions League, conceding Juventus were 'arrogant' on their way to only one win in six group games.

"In the Champions League we were perhaps a little bit arrogant playing against Copenhagen or Galatasaray," Conte said.

"We didn't grab our opponents by the throat straight away and we paid for that."