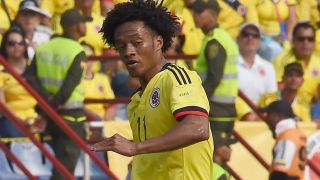 Antonio Conte believes winger Juan Cuadrado can still have a future at Chelsea.

Cuadrado was a high-profile signing from Fiorentina during the January 2015 transfer window but, as Chelsea eased towards that season's Premier League title, the Colombia international failed to make an impression in the English top flight.

After no goals in 13 league appearance – only four of which were starts – Cuadrado returned to Serie A with Juventus, who he helped to a fourth consecutive Serie A crown during a season-long loan spell.

Speaking after Chelsea's 2-0 friendly defeat at Rapid Vienna on Saturday, former Italy and Juve boss Conte revealed he was an admirer of Cuadrado during his own time in Turin and hopes the 28-year-old will be ready to fight for his place when he returns from a break on the back of Colombia's Copa America Centenario campaign.

"He is a Chelsea player and I am waiting for him," Conte said. "He must come back very soon.

"He is in our squad. I am very happy to have him. He is a player I wanted in Juventus and now he must come back and start to train with us.

"Yes, he is Chelsea’s player and he will stay with us. If something changes you will know."

Chelsea completed the signing of N'Golo Kante from Leicester City ahead of their opening pre-season friendly, with the France midfielder joining Belgium forward Michy Batshuayi as their second major close-season recruit.

Napoli centre-back Kalidou Koulibaly has also been heavily linked to the club but Conte refused to be drawn on the speculation.

"I don't like to talk about players [who are] with other teams," he said. "I think it is not a great respect for the other team.

"I don't like other managers talking about my players. I don't like to speak of the players that are now with other clubs."