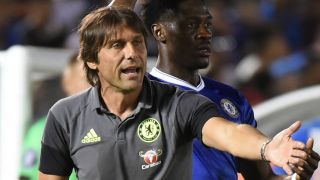 Antonio Conte expressed his appreciation for Carlos Tevez but refused to comment on whether he had asked the Argentinian to leave Boca Juniors and join him at Chelsea.

Tevez claims Conte called him regarding a potential reunion at Stamford Bridge, the pair having worked together at Juventus.

But following Chelsea's 1-0 International Champions Cup win over Liverpool in California on Wednesday, Conte was reluctant to address the situation.

"Carlos was my player when I was coach at Juventus and we had a fantastic season," Conte said.

"I appreciate Carlos a lot, as a player and also as a man.

"But now I know he's a player of Boca and he did a lot to go back to Argentina and I wish for him and for his family the best."

Gary Cahill's early header won the game at the Rose Bowl for Chelsea, who had to play the final 20 minutes a man light after Cesc Fabregas was shown a straight red card for a dangerous tackle on Ragnar Klavan.

Jurgen Klopp revealed Fabregas had visited Liverpool's dressing room to say sorry, and Conte was also in an apologetic mood.

"I am sorry and the player is too," Conte said. "I am sorry for him and the Liverpool player.

"In this period it is easy to go too late into a tackle. I know Fabregas is a good man and a good boy and he is not the type of player to have this situation."

Fabregas, meanwhile, felt the referee was over-zealous in his distribution of cards, with six cautions also issued during the game.

"The way the ref was giving yellow cards, probably yes it was fair," he said.

"In the Premier League, probably you could get away with it. I got there late, he got a toe to the ball and then I was anxious to win the ball. It was a hard tackle, so I accept it and move on.

"We want to win every game and everything becomes very competitive. But the ref for them and for us was giving cards all over the place.

"Sometimes when you do that as a ref you lose a little feeling of what is happening, because if you give one that is 50-50 or 40-60 then you have to give the next one. It became a bit of a farce. He didn't have the game under control."