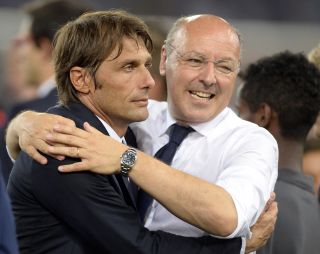 The Serie A champions were 4-0 winners over Lazio at the Stadio Olimpico as Paul Pogba, Giorgio Chiellini, Stephen Lichtsteiner and Carlos Tevez found the net.

Conte praised his players for a fine performance and said he would be happy if all they added to their trophy cabinet for the rest of the season was a league title.

"In the press conference yesterday I said I was relaxed because I know my players and above all what they are like as men," Conte told Rai Sport.

"I knew we'd face this one-off match in the right way. It is one game, there is no tomorrow and you have to do it today.

"We continue to write history, these players put in a great performance and it was a deserved victory.

"Don't forget we only actually lost one match in 90 minutes, against LA Galaxy. We know that we still have to shake off the heavy pre-season training work, but we deserved the win and I'm very happy."

Lazio coach Vladimir Petkovic apologised to the club's fans after the loss, describing parts of their performance as 'naive'.

Petkovic said his team collapsed and needed to learn from their mistakes.

"It was a psychological collapse and with that blackout we conceded another two goals in quick succession," Petkovic told Rai Sport.

"Juve didn't create much until the second goal. We conceded an avoidable goal from a dubious free kick and Juventus were smart. They deserve credit for that.

"We certainly have to get our feet back on the ground. We tried to do that after winning the Coppa Italia final and must do it again now.

"We were perhaps a little too confident against a great Juve side when we weren't 100 per cent fit."