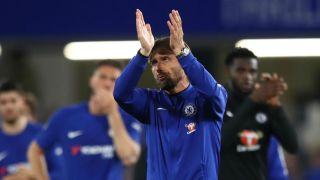 Antonio Conte has thanked Chelsea's players and staff for their efforts during his two-year tenure – but made no mention of his former employers on the Stamford Bridge board.

Conte's long-anticipated departure was confirmed on Friday, with the Italian's countryman Maurizio Sarri installed as his successor as expected over the weekend.

The former Juventus boss masterminded a dominant Premier League title triumph during his first season at the helm in 2016-17 but Chelsea's title defence stalled last time around.

Conte expressed regular disgruntlement with the club's transfer policy and, following a fifth-place finish in the top flight, the dye was already cast before a 1-0 FA Cup final win over Manchester United.

"I would like to thank all of my friends at Chelsea Football Club for their hard work and support over the past two seasons which enabled us to win the Premier League and FA Cup together," the 48-year-old said via a statement released by the League Managers' Association.

"To the players, whose talent and commitment was so important to our successes, I thank them for everything. It has been a pleasure working with them every day.

"To my staff, who always worked so hard, I must say thank you and well done for their professionalism and dedication throughout."

Conte, who returned to take the opening days of Chelsea's pre-season training before his exit was ratified, also reserved warm words for the club's supporters.

"I have enjoyed my time in England and London so much and I want to thank the Chelsea fans who have been amazing to me and my family," he said.

"It was fantastic for me to be able to share my emotions, passion and enthusiasm throughout two unforgettable seasons with these amazing Chelsea supporters, who will always stay in my heart."

Having been linked to now-filled posts with Italy and Real Madrid, Conte is expected to take a sabbatical and added: "I hope Chelsea will continue to be successful and I wish everyone well for next season.

"I have made many memories during my time with Chelsea, which I will take with me into my next challenge."