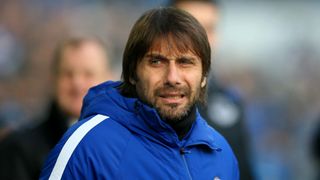 Antonio Conte refused to discuss the plethora of strikers linked with Chelsea in recent days, but would be "happy" if the club opted to bolster his squad in the January window.

Chelsea have reportedly considered bringing in a traditional target man - Edin Dzeko, Fernando Llorente and even Stoke City veteran Peter Crouch have been mentioned - with Conte seemingly on the look-out for a back-up to the struggling Alvaro Morata.

And while the former Italy boss was not willing to talk about individuals, he did hint some help would be welcomed.

Asked specifically if he was confident the club would see some new players arrive before the end of the month, he said: "I am confident? Confident is a big word, we have to wait.

"I give my opinion to the club but the final decision is for the club. I have to wait to see what happens. I am very calm in this aspect because I am working with my players in the right way and I am very happy for their commitment.

"If the club wants to help us we are happy, otherwise we continue in this way and give ourselves every day to give satisfaction to our fans."

Antonio Conte will shortly be speaking to the media. Updates to follow... January 19, 2018

Conte was asked directly about Dzeko, Llorente and Crouch but gave a familiar reply, adding: "As you know, it is not right to talk about players from other teams. I am not interested in it.

"In this moment I can talk about my players, Morata and [Michy] Batshuayi. it is not right to talk about the characteristics of other players.

"I have always said that I'm happy to work with my players, to try to improve them. Every striker has their own characteristics, in his case Morata has this and Batshuayi has this."

One new recruit now available to Conte is Ross Barkley, who signed from Everton on January 5. The England midfielder played 70 minutes in a friendly on Thursday and is in the squad for Saturday's trip to Brighton and Hove Albion.

Conte added: "Ross is in good physical condition. He's in the squad, he's coming with us. I don't know if during the game I decide to give him the chance to play a part or wait."

The champions will, however, be without the injured Gary Cahill and Cesc Fabregas while Morata and Pedro are both suspended.