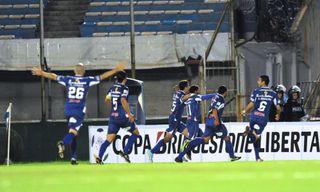 After losing the first leg in Paraguay 2-0, Uruguay's Defensor will need to produce an impressive performance at home on Tuesday if they are to reach their maiden final in South America's premier continental club competition.

Defensor have not lost at home in the Copa Libertadores since February 2012 with six wins and two draws in their past eight matches at the Estadio Luis Franzini in the continental competition.

In a boost for the hopes of coach Fernando Curutchet and his Defensor team, the Uruguayan club have won by at least two goals on four occasions in that period.

The Montevideo-based club need at least two goals at home to win on Tuesday.

Brian Montenegro and Derlis Orue scored the goals for Nacional in the first leg.

All four clubs in the semi-finals have never played in a Libertadores final with Argentina's San Lorenzo set to travel to Bolivar on Wednesday with a five-goal advantage for the other second leg.

Emanuel Mas was the main destroyer of Bolivar in San Lorenzo's home leg, scoring a brace, while Leandro Romagnoli set up the first two goals in the 5-0 win.

Bolivar have reached the final four of the Copa Libertadores before but barring a miracle at the Estadio Hernando Siles, the Bolivian outfit look set to be eliminated in the semi-finals this year, just as they were in 1986.