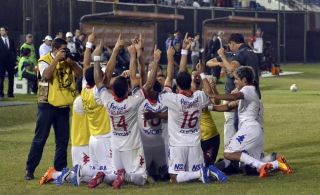 Nacional Asuncion will hope to end a seven-game winless run, as they aim to reach their first Copa Libertadores final.

The Paraguayans host Defensor Sporting of Uruguay in their Copa Libertadores semi-final first leg on Tuesday but are struggling, having been thumped 6-2 by Guarani in the Division Profesional in their last fixture, which was held on June 26.

Gustavo Morinigo's men are out of form, having not won a match since May and losing four of their past seven games.

In a boost for Morinigo and his men, however, Defensor have not played since May.

Nacional edged past Argentine club Arsenal 1-0 on aggregate to reach the final four.

Defensor, Bolivar and San Lorenzo are also aiming for unchartered territory as they look to reach the final.

San Lorenzo will host Bolivar in the first leg of the other semi-final on Wednesday.

Argentina's San Lorenzo are previous Copa Sudamericana champions back in 2002 but have never reached the Copa Libertadores final, despite being the first Argentine club to participate in the tournament in 1960.

Bolivar have been in the semi-finals of the Copa Libertadores before in 1986, while they also reached the Copa Sudamericana final in 2004 but have never tasted continental success.

San Lorenzo defeated Cruzeiro 2-1 on aggregate in their quarter-final tie, while Bolivar edged past Lanus 2-1.

Bolivar have not played since May, while San Lorenzo returned to action on Thursday with a 2-0 victory over Almirante Brown in the Copa Argentina, which could prove the difference against their Bolivian opposition.

Defensor had the most comprehensive win in the final eight, cruising past Atletico Nacional 3-0 over two legs.