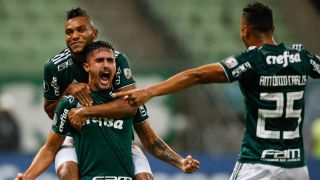 Palmeiras and Libertad made it two wins from two matches in the group phase of the Copa Libertadores on Tuesday.

Thiago Martins and Miguel Borja inspired Palmeiras to a 2-0 victory over Alianza Lima in Group Eight as the in-form Brazilian side preserved their perfect start.

Riding a seven-match winning streak after upstaging Corinthians on Saturday, Palmeiras stayed hot against the Peruvian visitors – Martins opening the scoring in the 10th minute.

Martins – unmarked – reacted quickest to tuck away the rebound after Antonio Carlos' header rattled the post at the Allianz Parque in Sao Paulo.

Borja doubled the lead within a minute of the second half when the Colombia international converted from close range after Alianza Lima goalkeeper Daniel Prieto spilled a simple save.

Paraguay's Libertad also maintained their 100 per cent record thanks to a 3-0 win at home to 10-man The Strongest.

Following a scoreless first half, which saw Edison Carcelen sent off for The Strongest inside 30 minutes, Libertad netted three unanswered goals via Ronaldo Baez and Wilson Leiva's double.

With the result, Libertad moved three points above The Strongest atop Group Three.