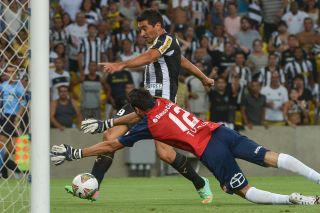 The Brazilian outfit were powered to all three points in their Group 2 clash at the Estadio Jornalista Mario Filho by goals to Juan Ferreyra and Wallyson.

Ferreyra, playing against a club from his homeland in Argentina, scooped on the remnants of a saved long-range effort from team-mate Jorge Vagner.

Vagner's shot was deflected by a San Lorenzo defender, and was on target before goalkeeper Sebastian Torrico parried - only for Ferreyra to quickly be on hand to tap home into the empty net.

Wallyson then ensured Botafogo of victory, as he curled a dipping strike past the diving Torrico from outside the area, that made the result comfortable for the hosts.

Elsewhere, Santa Fe opened their account with a 3-1 home win over Nacional Asuncion.

The tie at Santa Fe's Estadio Nemesio Camacho in Bogota was goalless until the 58th minute, when Edison Mendez struck.

A minute later, the hosts were 2-0 to the good via Daniel Torres but Nacional were back in the game courtesy of a Nicolas Martinez penalty.

But Santa Fe made sure of the points, as Jonathan Copete - provider of Mendez's opener - turned scorer in the 81st minute.

In the remaining fixtures, there were 1-0 results - with Santos Laguna of Mexico beating Argentina's Arsenal, while Brazil's Atletico Mineiro won away to Venezuela's Zamora and Argentine club Velez Sarsfield took all three points from Peru's Universitario.