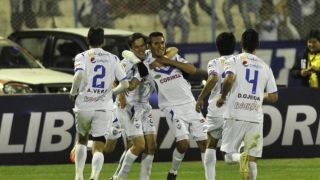 River Plate had revealed in the lead-up to Thursday's match that their players would take Viagra in that hope it would help them "breathe better" at San Jose's Estadio Jesus Bermudez in Oruro, which is situated over 3700 metres above sea level.

But the Argentinian visitors could not hold on for a point, with San Jose striking twice in the final 10 minutes to win.

In Uruguay, Danubio hit the front after 10 minutes thanks to Matias Castro's scrambled shot but the hosts could not clinch victory with San Lorenzo starting their defence of the 2014 title with three points.

In Thursday's third match, Atletico Nacional held Libertad to 2-2 draw with both sides converting from the spot.

But another spot kick on the hour mark, saw Nacional level proceedings when Luis Ruiz converted from 12 yards.